MAKING THE TENNIS TEAM AT SCHOOL FOR FIRST TIME 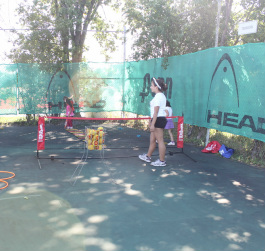 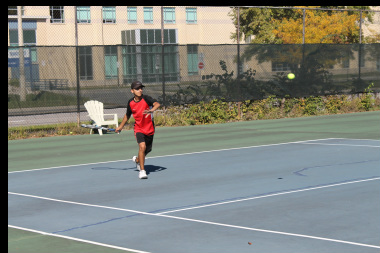 Success Story
PERSEVERANCE
Siyr was the typical teenager, sitting at home watching TV or playing on the computer when his amazing sister asked if he could join our program. Sure, we said, we would love to have him! Then, there was no keeping Siyr off the courts - he improved and played and played so much. Siyr couldn't see himself sitting at home anymore, he loved being outside and active!

When it was time to try out for the tennis team at school, he not only made the team, but also went on to the finals where he and his partner won a silver medal after a loss to Ashbury College - quite an achievement! Siyr also volunteered 400 hours for us last year. What an amazing person and congratulations on your success! 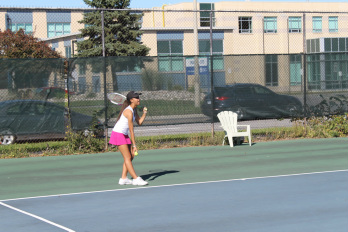 Another Success Story
COMMITMENT
Rachel has been coming to the courts since she was quite young - first to take lessons but over the past few years to help volunteer and teach the little ones what she loves. Every year, when she sees the nets go up, she knows Hillcrest is where she wants to be. Last year alone Rachel also volunteered over 400 hours. It is her patience, leadership skills, and positive attitude that we and the kids love so much.

Congratulations Rachel on also being accepted to attend the Viennese Opera Ball in Ottawa. What an achievement! 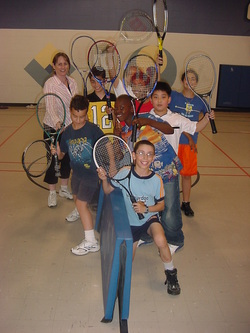 COMMITMENT - Kids displayed Honesty, Integrity, Perseverance, Respect, Commitment and Teamwork
We had never seen anything like it. To us it was magic. Kids came to school with their tennis racquets in their backpacks and at recess and lunch, they lined up to play on a court with imaginary lines and no net, while still calling faults and following the rules of the game. They took turns one after another and played every minute and everyday they had the chance. We had visited the school several times, but for us we had never witnessed such dedication and commitment from any teacher in providing these kids with an opportunity of a lifetime. It was like the kids were playing at Wimbledon, but they didn't have the facilities.

Tennis Anyone?
When one thinks of top tennis players, names such as Caroline Wozniachi or Roger Federer usually come to mind. Avid fans of these professional players have been following their careers for years. For myself, I have often wondered how and when did these players get hooked on tennis. At what age did they begin playing? Was there a deciding moment or a key person in their younger lives that encouraged them to stick with it and keep practicing? Personally, I have no idea how they got started in the game, but I sure know how the students of St. Michael School in Ottawa, got started in the game of tennis.

For the last nine years, I have been teaching at St. Michael School. One day, during morning recess, I noticed a grade four student walking around the yard, swinging his tennis racket and bouncing a ball on the pavement. I was curious and I wanted to chat with him about his interest in tennis.  I strolled over to better observe ‘his singles match’ he had going with the pavement.  As I approached him, I called out: “Hey, Kyle. Cool looking racket you have there. I didn’t know you played tennis.”

As Kyle and I walked around the schoolyard, we chatted about tennis and he asked if I played as well. As the school bell rang to call us back to class, he asked if I’d be interested in getting together for a game sometime. I could see in his eyes and hear in his voice, that he had a keen interest in tennis. The following day, I brought my tennis racket to school and it was there, in my classroom, ready for me to use.

As Kyle and I met during recess to play tennis, interest grew among the other students as well. Very soon, more interested players brought their rackets to school and before long, we were forming our very own tennis club at school.

Over recess break, part of the schoolyard turned into a tennis court. At every recess bell, excited students would rush to the yard to claim a section of the pavement for a tennis match with their partner.

If ‘the court’ filled up quickly, students would practise their strokes against the wall of the school. We lost many balls to the roof of the school, as I recall, and our custodian had to retrieve them that day, so the game could continue during the next recess. It was very heart-warming to witness their excitement in the game. On rainy days, we’d move inside the school and set up the standard blue exercise mats (found in every school gym) to act as tennis nets. Very quickly, the tennis club grew and we had to break the students up into two groups. Ms. Clare McGrath, a grade two teacher, offered to help. She too was a tennis player and wanted to spread her love of the game as well by coaching the students. As the ‘club’ grew, I took the Monday group, while she took the Thursday group. A mini-Wimbledon was happening in our school gym over lunch recesses let me reassure you. Energy and excitement over the game grew. Star players were making their mark on the court. Kyle finally found his match!

Through the grapevine, Danielle Smith, heard about our school tennis club and how passionate the children were in wanting to learn the game. Within a very short time, she took interest in our school and offered to come and teach our students tennis. She arrived at school with all the equipment needed to begin ‘formal lessons’. She even brought along ‘real’ portable tennis nets to set up in the gym. The students were thrilled! We no longer needed our trusty blue gym mats to act as tennis nets. Not only did Danielle bring along the much-needed equipment, she also brought along young and energetic tennis coaches who had years of experience playing and teaching tennis.

Over the next TWO years, every student at our school, from Junior Kindergarten to Grade 6 had the opportunity to learn tennis and receive top quality instruction from Danielle and her team of coaches. All teachers were given instruction as well during an after school program offered by Danielle. Through her generosity and support, tennis equipment was donated to the school. We now have a complete school set of tennis rackets, balls and two portable tennis nets…ALL… donated by Danielle and her tennis organization. As lessons progressed, passion grew among the students for the game. They were hooked.

With the exception of our grade four student and ‘founding member Kyle’… most of our students had never played tennis before and probably would not have had an opportunity to take lessons if it were not for Danielle and her endless dedication to the sport.

Over those two years of tennis instruction, tennis lessons taught our students the importance of co-operation, team spirit, sportsmanship and fair play. It gave our students a sense of ‘team’. The spirit of our school soared with excitement over this tennis program.

Danielle and her young coaches continued to come to our school, even though funding was not available to run the program. Out of love of the game, and wanting to pass it on to the youth of our school, lessons continued over a two-year period.


The staff and students of St. Michael School Ottawa wish to thank Danielle for her many hours of dedication and commitment to promoting tennis to our students. Like every dedicated teacher, Danielle shared her passion and love of her subject, tennis, with the students and staff of St. Michael School. And for this, we are very grateful.

Kyle has long graduated from St. Michael School. He is no longer a grade four student running after a tennis ball on our schoolyard. In September 2009, Kyle will be entering grade 9. I wonder will there be a tennis program offered in his new school? I sure hope so.